The Ride of my Life

A better title would be "my Life of Riding" but Ride of my life is more catchy so that's what I'm using.

This ride starts way back before many of you were born. Some of you old timers like me may relate. This starts back in the 60;s when I was growing up in Cleveland, Ohio. I did a lot of riding back then. Unfortunately my bike didn't have all that much power and looked something like this: 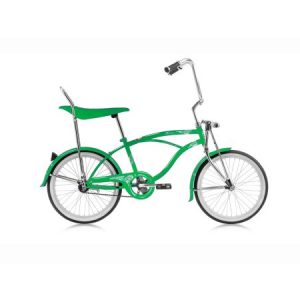 These things could be made to go pretty fast since my neighborhood had some pretty good hills.

So I enjoyed riding but I wanted something more. Back then, just like today, the cool kids had something with an engine. Something like this was popular back then. 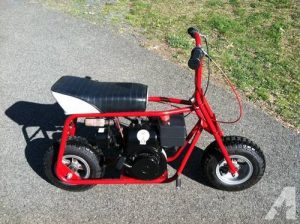 One kid was really cool and had my dream bike. This was the ultimate in cool. 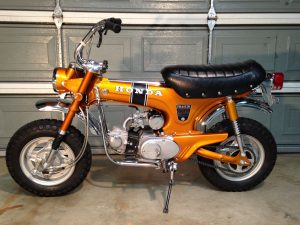 One of my friends had a dad who was a cop.  One day he responded to a motorcycle accident.  Some kid had crashed and it wasn't his first time.  The kid's dad was there and told my friend's dad that he could have the motorcycle.  He didn't want his kid riding any more. 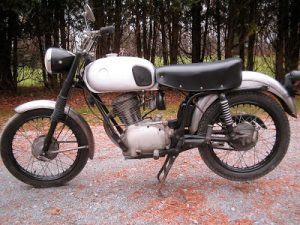 I think we were both around 13, too young to legally ride on the street. That didn't stop my friend. We also lived near some woods with a lot of trails and fields. My friend explained how the throttle, clutch, shifter and brakes worked and let me loose in the woods. I only got to ride it a couple of times. One day my friend was riding around the neighborhood and was pulled over by a cop for not wearing a helmet. That's when he discovered he also had no license. So that was the end of that bike and I had to settle for pedaling for many years.

I do remember going on some long rides, coming to a hill and thinking "this would be waaay more fun" on a motorcycle". 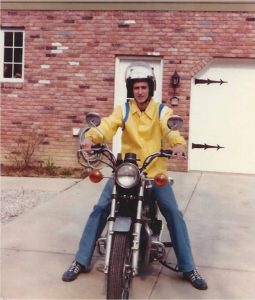 Sometime in the late 70's I happened to notice some motorcycle magazines in a store and picked up a couple.  The I bought some more.  I tried not to drool too much on the pages

For those of you too young to remember, things where a little different back in 1980. There was no Internet, no cell phones, no digital cameras, and motorcycles where quite a bit different from today. back then you met the nicest people on a Honda. The Honda 750/4 was still pretty new and was a huge bike.

1980 was the year I decided it was time to finally buy a bike. There was no Craig's List so I looked in the classified section of the local newspaper. I had decided that something like a Honda CB350 or Kawasaki KZ400 would be the perfect bike for me. I found a 1976 KZ400 in the paper and went and looked at it. It wasn't exactly what I wanted. It was a boring black and was the cheap model with drum brakes and no Tach. I didn't even have a license so I had the owner take me for a ride on it so I could see that it ran OK. I should have looked at some more bikes but I was young and impatient so I bought it. Not only that but I paid the full asking price of $670.

The owner rode it to my house and I forked over the cash. I was now the actual owner of a real motorcycle. I quickly went and got my motorcycle learners permit and went down to the local department store and picked up a 3/4 helmet. I figured it would be more comfortable if it had a nice and loose fit.

Back then if you wanted to take a pic you had to buy this stuff called film, load it into your camera, take not only the pic you wanted but also finish the entire roll before taking the film to the store to get it developed. Then you waited a few days before picking it up. It's no wonder then that people didn't take as many pics back then as today. However, I sometimes did all that and I did get a pic of me on my first bike: 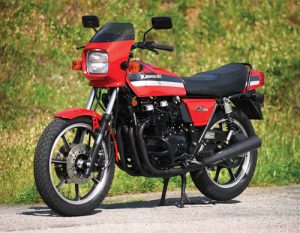